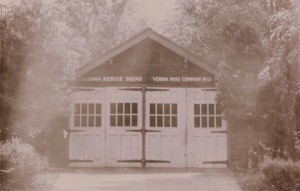 The Verona Rescue Squad of 2012 has a very rich and deep history. We are one of the oldest squads in the State of New Jersey and are a total volunteer organization. Regardless of our name our goal has always been service to our community. Our members have carried on this fine tradition for the past 85 years. Below is a brief history of our organization from 1927 to today..

In 1927 a group of 12 firemen from Hose Company #2 of the Verona Fire Department joined together for the purpose of “protecting life, limb and property in the Borough of Verona and other municipalities in Essex County.” This group became know as the Verona #2 Rescue Squad. At the time the squad only concerned itself with rescue and first aid as all transportation was covered by Mountainside Hospital’s own ambulance. Membership initially was only open to members of Hose Company #2 but in 1936 membership was opened to all Verona firemen. The first vehicle for the Verona #2 Rescue Squad was a Pierce Arrow Roadster. The members constructed a special body for the vehicle and equipped it with a first aid kit and a Clark Inhalator. With this vehicle the Verona #2 Rescue Squad covered a large portion of North Jersey while other area squads were still in their formative stages.

On September 18, 1929 the Ladies Auxiliary of the Verona #2 Rescue Squad was formed. This group was organized for the purpose of helping the rescue workers in any way possible. Membership was originally limited to wives of rescue squad members but eventually friends of these ladies were allowed to become members. This group of women held numerous events such as card parties, luncheons, fashion shows, square dances, and dinners to raise money for the squad. They also organized parties and dinners for the squad members and their families. This group was officially disbanded in the early 1990’s as they did not have enough active members to sustain the group.

The Verona Ambulance Unit was organized in 1942 as a civil defense activity by a group of Verona residents who believed that such a unit was necessary and assumed the task of transportation. A group of men in the Auxiliary Police got together to raise funds with a dance at the Meadowbrook. The money was used to purchase a second hand 1939 Buick LaSalle. In 1944 the Verona Ambulance Unit purchased the property and building located at 12 Church Street from the town for $1.00. The original building was an old carriage house. In 1956 an addition was made to the front of the building. This became the new bay area. This area is currently used as the meeting room.

The wives of the Ambulance Unit members played an important role in the history of the organization. In the early days there were no plectrons or radio systems as there are today. It was the job of the telephone girls (or as they are more well know “Call Girls”) to notify the crew members by phone when there was a call. The women would each take a specific number of hours each week and be available to receive a call from the Verona Police. The police would advise them of the nature and location of the call. In turn the “call girl” would then contact the crew members to respond.

In 1976 Verona Mayor Jerome Greco and the town council advised the Verona # 2 Rescue Squad and the Verona Ambulance Unit to merge into one unit. They felt this was necessary due to the duplication of purchasing and fund raising and that it would be in the best interest of the two organizations as well as for the Verona residents. The organizations were given six months to accomplish this. They were advised if not completed in that time frame the Mayor and Council would set the terms for the merger. After eight months of meetings and deliberations, many of which were very heated, the two organizations presented a plan for their merger which was to become effective on January 1, 1977. After the merger the new organization, known as the Verona Rescue Squad, took up residence in the former home of the Ambulance Unit at 12 Church Street. In 1978 the building was expanded with a three bay addition to house all the Rescue Squad vehicles.

Over the years the Verona Rescue Squad has responded to many well know disasters. Many of these events have become historic events for our state and country. These include the sinking of the SS Morro Castle in Asbury Park on September 8, 1934: the Hindenburg Crash in May 1937; the Hercules Powder Plant explosion in Kenvil in September 1940 and the Woodbridge Train Wreck in 1951. The squad stood by in Morristown NJ in April 1982 when a New Jersey State Trooper was trapped in a cave 15 feet underground. Our most recent response to a historical event was the Verona Rescue Squads response to the World Trade Center disaster on 9/11/2001.

Today the Verona Rescue Squad has over 60 members who range in age from 16 to over 80 and come from all walks of life. They give freely of their time, energy and talent to help those in need. It is because of the dedication of members both past and present that the squad has selflessly served the citizens of Verona for the past 85 years.