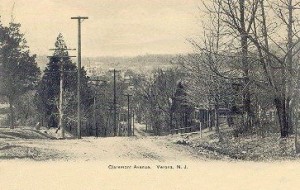 An Overview of Verona’s History

Nestled between the gentle folds of the First and Second Watchung Mountains of western Essex County lies Verona Township. It is a valley town divided by the Peckman River, which flows northward from West Orange to Little Falls, where it joins the Passaic River. Today Verona is thriving and, like its surrounding communities, it is busy with the hustle and bustle of modern-day activity. While probably unknown to many; our community is one with a proud and shining heritage.

Settled early in the eighteenth century by pioneers who moved northwest from Newark or southwest from the Paterson area, the Verona scene was dominated for many decades by small farmsteads that had been carved into the virgin wilderness. Like its counterparts, Verona had its mills, blacksmith shops, and general stores, which supported the agricultural base. Many labored long and hard, and from all accounts, life was rigorous. By the turn of the 19th century only a handful of families had settled in the area, but vast changes were about to take place.

In 1806 work began on the Newark and Pompton Turnpike—what is today known as Bloomfield and Pompton Avenues. A vast improvement from the early pioneer roads, which had the tendency to meander and were poorly maintained, the new road allowed local residents to travel more easily to the markets of Newark and Paterson. Not long after the Civil War, another attempt was made to improve travel when a rail line was proposed that would parallel Bloomfield Avenue. Work was begun on a tunnel through the First Mountain and embankments were created through the valley. The project lured speculators like Captain Hiram Cook, and though the rail line met with failure, Cook and others remained. Cook’s vision and foresight were ultimately responsible for transforming an unimproved mill pond into Verona Lake, which became a mecca for those seeking recreation.

As the area grew, public institutions such as schools and churches were established. The Methodists were the first to establish themselves in Verona and it is believed that some of their early revival gatherings were held at the White Rock high atop the Second Mountain. In the second half of the 19th century Verona would become host to the Newark City Home which provided a shelter and learning environment for the wayward children of Newark. It would survive for more than fifty years. Early in the 20th century, a portion of this institution—the Girls Administration Building–would be converted to accommodate those suffering from tuberculosis and would be the nucleus of what would become the Essex Mountain Sanatorium whose buildings were removed in the 1990’s.

The 1890s were a boom time for Verona. Early in the decade a railroad was constructed through the northern portion of the community, and by the end of the decade residents could enjoy uninterrupted trolley service to Newark. With the improved transportation came new families who would make Verona their home and slowly transform it from an agricultural community into a bedroom suburb of Newark and New York. By the turn of the century the population had swelled to more than 800.

As Verona grew, its residents developed new needs. Since 1798 Verona had been part of old Caldwell Township, which was comprised of about a half a dozen communities.* Shortly after the creation of the Township, nine school districts were created and each given its own name with Vernon selected for our area. By the middle of the 19th century, the nation was rapidly expanding and coming into its own as a result of the Industrial Revolution. The Classics had become important and were being reflected in, among other things, architecture. Slowly Greek Revival architecture was giving way to that of Italianate Victorian. It was in this era that Vernon made application for a local post office but due to there already being another in New Jersey, the name had to be changed so it was natural to go from Vernon to Verona.

In the closing years of the 19th century many local residents felt their tax dollars were going to work in other areas of the township, so in 1892 both Verona and Cedar Grove separated from the old township and created Verona Township. This union would not be long lived because the development of Verona exceeded that of Cedar Grove. In 1907 Verona residents wanted an up-to-date water system, but this was considered an extravagance to Cedar Grove. The two communities amicably parted company and the Borough of Verona was created.

Many communities recognize their past through their remaining historical landmarks. Although Verona has lost many of its early and most fascinating sites, some survive interspersed through out the community and firmly stand their ground as silent testimonials to a proud but almost forgotten era. Behind every historic building is a story of the people who built and used them. Many of these people made significant contributions in molding our community and some like Michael Kiefer paid the ultimate price while defending the liberties and freedom of our nation.* Some of their stories are still known while many others have been covered by the veil of time.

While we celebrated our centennial year in 2007 it is important to keep in mind those who came before us and the contributions and sacrifices they made in building Verona and making it the community it is today. They all had their trials and tribulations and survived—wars, famine, economic depressions and so much more that mere words cannot do justice. But they, like us, are a link in a continuous chain ever continuing forward into time.