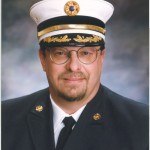 Attended the University of Kentucky (1973)

I joined the Verona Auxiliary Fire Department in June, 1968

Became a Regular member of the Verona Fire Department in November, 1974.

Currently resides at 105 Elmwood Road, which was the home where my father first moved to Verona in 1936, from Bloomfield.